“It's buzzing with activity.”

“A wretched hive of scum and pollen.”

“The natural home of the bee.”

“They're all comfy-cozy in there.”

“It vibrates with activity.”

“The bees must sleep in there.”

“I can hear the activity within.”

“A PLAGUE ON BEES HOUSES!”

“I like it better when it's making me honey.”

“One swift kick and it becomes a great prank.”

“I reeaally shouldn't get closer...”

“I'm sure the bees are working like clockwork in there.”

Beehives are naturally occurring structures only found in Grassland Biomes, holding up to 6 Bees or Killer Bees. They have 200 health, and drop 1 Honeycomb and 3 Honey when destroyed. Unlike Bee Boxes, Bees have no effect on the items dropped. Beehives do not respawn, making Honeycomb a non-renewable resource.

“I think those bees are mad.”

“I had better keep my distance.”

“They hide in their fortress of hate.”

“A BEAUTIFUL EXAMPLE OF EFFICIENCY”

“I had best keep my distance.”

“Why are those bees so angry?”

“It vibrates with activity.”

“The worst kind of hive!”

“Not your average bees.”

“Leavin' it alone be th'best course.”

“I gotta admit, those horrible bees sure can build a house.”

“Wouldn't mess with that without good reason.”

“Do I want to start some mischief?”

“I'd rather not be stung within an inch of my life, thank you.”

Killer Bee Hives are naturally occurring structures found only in Grasslands biomes (usually next to Beehives) holding up to 6 Killer Bees. They appear in Sandbox Mode and more frequently in Adventure mode. Like normal Beehives, Killer Bee Hives drop 1 Honeycomb and 3 Honey. They also do not respawn.

A Beehive will (re)spawn a new Bee every game hour (30 seconds) up to the maximum population of 6 Bees per hive. Bees will leave their hive during the daytime, one at a time every 50 seconds. They return to their hive at dusk. During Winter, Bees do not leave their hive.

A Killer Bee Hive will (re)spawn a new Bee every 20 seconds up to the maximum population of 6 per hive. Killer Bees normally stay inside their hive all day. If the player wanders too close to their home they will immediately swarm out and attack even at Night and during Winter. Other creatures do not trigger this behavior.

If a Bee or a Killer Bee is attacked or captured with a Bug Net, all members of the hive will emerge as Killer Bees to engage the offender. Additionally, Bees from the same hive, that are less than a screen away, and any "homeless" bees (killer or otherwise) will also join the fight. Up to 10 Bees and Killer Bees will engage the offender, however additional offences, such as attacking one of the defenders is considered a new offence and additional Bees may join the fight.

If Beehive catches on Fire, all members will swarm out as Bees for Beehives and Killer Bees for Killer Bee Hives, and they will stay neutral to the offender, as Fire is not considered a direct damage, including the cases where it is caused by a direct hit from an incendiary weapon, such as a Fire Dart. Once on fire, the hive will burn up, dropping 4 Ashes.

A colony of five Beehives.

A Beehive on fire.

Killer Bees spawning from their hives to attack Wilson.

Killer Bee Hives as seen on the Map, blocking off an area. 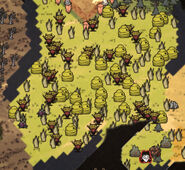