“Keep that stinger away from me!”

“No amount of honey is worth THAT!”

“The workers ferociously protect her.”

“Bees got no business getting that big.”

“Your honey was too delicious not to steal!”

“Tweeheehe! You're a big bee!”

“If I make friends with their queen, maybe the bees won't sting me!”

“This was a terrible idea!”

The Bee Queen is a Boss Monster exclusive to Don't Starve Together, introduced in A New Reign. She has the appearance of a gigantic Bee with two large wings, a stinger, black and yellow stripes on her thorax and a beehive on her abdomen. The Bee Queen is spawned after a Gigantic Beehive is Hammered sufficiently. She will emerge from the hive, leaving a honey blotch behind. She immediately spawns Grumble Bees, and will auto-target any player that approaches.

If left alone long enough without being attacked, the Bee Queen will return to her patch and replant herself. The Gigantic Beehive can be immediately hammered again to respawn her.

The Bee Queen deals 10 more damage to Walter due to his allergy to bees.

The amount of Grumble Bees she spawns will increase as her health decreases, reaching up to 8 at a time in the second half of the fight. She will additionally start boosting her minions by screeching. Boosted Grumble Bees attack much faster and are challenging to kite in larger groups.

Below is the number of hits it takes with each weapon to kill a Bee Queen when playing with characters with a default damage modifier. The Weather Pain is not included due to the random nature of its projectile.

It takes 5 blasts to freeze a Bee Queen with an Ice Staff. It takes 5 Sleep Darts to put Bee Queen to sleep.

One of the most common, yet also very resource expensive tactics used to defeat the Bee Queen, is to construct around 20-30 Rabbit Hutches. The player(s) can construct them near the Gigantic Beehive so that the Bunnymen can engage on Bee Queen's awakening. The player should equip them with at least 15 Beekeeper Hats to significantly reduce the damage they are going to take. The Bunnymen will help take out the Grumble Bee minions allowing for the attackers to take focus on the Bee Queen herself. If using this tactic, one must be sure to bring healing items that are not meat, such as Blue Caps, as otherwise the Bunnymen are going to attack the players with said items in the inventory.

A more classic and simple way to deal with the Bee Queen is to use two or more Pan Flutes along with a classic equipment to sleep the Bee Queen and the Grumble Bees when enraged, and then completely focus on the main target while landing hits. This method is particularly effective in cases where there are several players that can sustain the fight fairly easily dealing heavy damage per second, especially for characters specialized in combat, such as Wolfgang or Wigfrid.

If a player in the server is playing as Wendy, Abigail's area attack can deal with the Grumble Bees effectively. The player might want to use the Nightshade Nostrum elixir (crafted exclusively by Wendy) on Abigail or fight during night, preferably during Winter, if the player wishes to use other elixirs and retain Abigail's damage. Wendy players should be careful to heal Abigail throughout the fight while earning time to deal damage to the main target.

Like against other bosses, it's recommended to bring several armor pieces to mitigate most of the damage taken from both the Bee Queen and the Grumble Bees, since it can be difficult to kite in this fight in particular, hence tanking damage can be more beneficial. It is recommended to wear the Beekeeper Hat as it provides the same amount of defense as a Football Helmet while having more than triple the durability. In addition, the player is advised to bring a Walking Cane in order to chase the Bee Queen and/or evade Grumble Bees attacks with more ease.

Her attacks spawn honey at where attack location for a short amount of time that can slow players movement speed. Because of this, players should avoid going back to the same location after each dodge, instead, go back to a slightly different spot.

She also leaves behind a trail of honey as she moves that slows down the player if they run on it, making it potentially difficult to chase her directly. The honey will eventually disperse in a short time.

A Bee Queen going to attack.

The Bee Queen as she appears in the Cute Fuzzy Animals update poster.

The Bee Queen as seen in the A New Reign: Part 2 trailer.

The Bee Queen as seen in the A New Reign trailer. 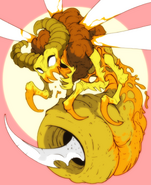 The Bee Queen as seen in a drawing from Art Stream # 71.