"Store your own bees."

“They shall labor so I can steal.”

“A factory for industrious insects.”

“That box has bees in and around it.”

“A HOUSE OF YUM YUM MAKERS”

“A box of honey just waiting to happen.”

“A box full of bees would make a great prank.”

“I thought I heard some buzzing coming from over here.”

A Bee Box is a craftable Structure that uses Bees to accumulate Honey that can be harvested. Bee Boxes are found in the Food Tab and require a Science Machine to prototype. It takes 1 Honeycomb, 4 Bees, and 2 Boards to build. When destroyed by a Hammer, it will return 1 Honeycomb and 1 Boards, and will release any Bees inside the Box.

A Bee Box will (re)spawn a new Bee every 4 game hours (2 minutes) up to the maximum population of 4 per box. All Bees will return to their box at dusk, but they will leave it during daytime one at a time every 37.5 seconds. During Winter, they won't leave the Box.

Technically, Bees do not have a fixed role. Instead, the same specimen can act as a worker or a fighter depending on what the current situation calls for. Every time a Bee leaves the hive, the game assigns it a role. When a Bee returns to the hive, that role gets erased. Therefore, the same specimen can fight off a threat as a Killer Bee, enter the hive, and then re-emerge as a worker to gather pollen. Thus, Killer Bees do not slow Honey production by competing with workers for living space as they are essentially the same thing.

If a Bee is attacked or caught with a Bug Net, all members of the hive still inside the box will emerge immediately as Killer Bees and engage. Additionally, all surrounding Bees less than about a screen away - killer or otherwise - will join the fight. The combined number of attackers coming to help cannot exceed 10 unless the player attacks another Bee.

After harvesting their Honey, all remaining Bees in the Bee Box will emerge as workers and attack while those that were already outside will ignore the threat unless the player fights back. If it is winter, the bees will not emerge to attack when honey is harvested (but they also don't emerge to produce honey during this time).

The speed at which Bees gather Honey is affected by the quantity and proximity to Flowers near a Bee Box. Every time a Bee successfully pollinates 6 Flowers, it will return home and increase the Honey contained within by 1. The same Flower cannot be pollinated twice by the same Bee within one trip or by two Bees at the same time. If a Bee doesn't manage to pollinate enough Flowers before dusk, it will have to start all over the following morning. For these reasons, having too few Flowers around a Bee Box can potentially halt production entirely.

Because Caves have their own day and night cycle and are in a permanent summer, Bee Boxes built underground will spawn Bees. The opposite applies to the Ruins since it is considered a permanent night there. However, if the Bee Boxes are far enough from the player, the simplified model of Honey production will take over and Honey will be produced at a rate of 1 per day in Caves and Ruins. If the Bee Box is then harvested, the bees will emerge and engage the player. When they disengage, they will behave, as on the surface, according to the time of day (i.e. stay out and visit flowers or return to the box).

In Don't Starve Together, Bee Boxes built in caves will function the same as on the surface. However, due to the lack of flowers underground, players may need to catch butterflies on the surface and plant their own flowers around their bee boxes. Bee Boxes built in caves can be a great source of honey to produce Taffy which can help with sanity problems normally caused by staying underground.

Bee Boxes can contain anywhere between 0 and 6 Honey. Visually they progress through 4 different stages to indicate Honey saturation at 0, 1-2, 3-5 and 6 units respectively. For example, a bee box at stage 3 (almost full) may contain between 3 and 5 pieces of Honey.

Typical harvesting is a slow process with low-risk and easy repeatability. Players can use the Beekeeper Hat while harvesting Honey to reduce damage from Bees by 80%. Ideally, Honey should be collected when all Bees are working outside. In this case, they will ignore the player entirely. The time this is most likely to occur is right before dusk and about 4 game hours into the day. It is also safe to harvest any time during Winter, as the Bees will not appear or attack when the player activates the Bee Box.

A good way to produce Honey on a large scale is to build a Bee farm.

The player must catch Butterflies with a Bug Net and plant them together for the flowers, then build a few Bee Boxes nearby. When planting the Flowers, care should be taken to not plant them too tightly together, as this actually prevents the Bees from reaching some of the flowers.

This general setup can yield great amounts of Honey per day when dealing with larger amounts of Bee Boxes. The Bees can also be captured for crafting Bee Mines. Additionally, the farm should be protected with at least some fire-resistant Walls and a few Lightning Rods, as fires can devastate Bee farms due to the large amount of Flowers present. This also prevents loss of Beeswax, which is a non-renewable resource.

Bee Boxes in the Reign of Giants DLC are flammable. During Spring, all Bees from both Bee Boxes and Beehives will look visibly similar to that of killer bees, they will also aggro anything that comes near contact with them, just like killer bees. However, despite this change in color and behavior, the Bees will still continue to pollinate Flowers and produce Honey as per usual. Furthermore, these red bees can still be captured with a Bug Net and used to craft new Bee Boxes.

“She won't be mad if I steal a liiiittle honey, right?”

“Is ready for harvest!”

“Their toils have been fruitful!”

“Honey can be harvested from it.”

“I've done enough, the old woman can brave the bees herself.”

“Hey Ms. old lady! Look at all the honey they made!”

“Madame, I believe your honey is ready!”

“So much honey! That crabby mortal might crack a smile!”

“She's quite creative with her limited materials.”

The Hermit Bee Box is a naturally spawning object exclusive to Don't Starve Together, introduced in Return of Them. One can be found on the Hermit Island.

The Hermit Bee Box works just like a normal bee box, exceptions being that it cannot be destroyed or burned.

Bees stuck beside their Bee Boxes. 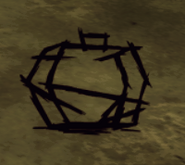 A burnt Bee Box from the Reign of Giants DLC.