“Look at those razor sharp claws! I need to get a closer view!”

Food Stats affect Bearger the same way as Players, so Healing food will heal him the same amount of HP to the player, the same way with Damaging food

Using Roads for kiting is also an effecient strategy, and can allow a third hit if timed correctly.

The Bearger cannot be put to sleep using honey in Don't Starve Together and will automatically aggro if a nearby player has a "honeyed" item in their inventory (Honey, Honeycomb, Royal Jelly, Taffy, Pumpkin Cookies, Honey Nuggets, Honey Ham, Powdercake and Jellybeans).

During Winter and Spring Bearger will yawn multiple times during combat, causing all players to be in a way stunlocked while Bearger is fighting who attacked him. He may also try to fall back into his hibernation after a while, even if he is attacking an enemy. 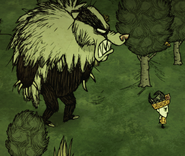 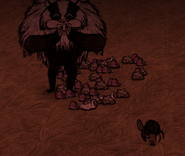 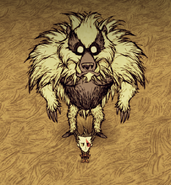 Bearger as seen in a poster announcing the arrival of Reign of Giants content in Don't Starve Together.
Add a photo to this gallery
Retrieved from "https://dontstarve.fandom.com/wiki/Bearger?oldid=470263"
Community content is available under CC-BY-SA unless otherwise noted.