“I made them with my face.”

“Uh, where did this come from?”

“Gross. These are not from my face.”

“This is human facial hair.”

“My hair's not that colour. Not my beard, anyway.”

“Facial hair that can be used for the manufacturing of belongings.”

“In another life, I could've grown this.”

“Someone is probably missing these.”

“Swell. I always wanted a bunch of scratchy hair.”

“I know it's the wilderness, but does he have to leave whiskers everywhere?”

Beard Hair is a resource mainly acquired by shaving Wilson's Beard with a Razor. It can also be acquired by killing Beardlings and Beardlords, creatures that replace Rabbits and Bunnymen, respectively, when Sanity drops below 40% (48 for Willow, 40 to 120 for WX-78, 100 for Wickerbottom, 60 for Wes, 40 for Webber, 60 for Wortox, and 80 for all other characters) and Shadow Splumonkeys, which replace Splumonkeys during the Nightmare Phase.

Beard Hair is used for the construction of Meat Effigies or simply as Campfire fuel.

When shaving Wilson's beard, the amount of Beard Hair received depends on the beard's length. Shaving will produce 1 Beard Hair after 4 days, 3 after 8, and 9 after 16. Wilson's beard doesn't grow any more after 16 days.

Gathering Beard Hair from Beardlings and Beardlords requires Sanity to drop below 40%. At this point, Beardlings appear and can be caught in Traps like normal Rabbits. Beardlings only drop Beard Hair 20% of the time, requiring that on average 20 or so be killed in order to acquire enough for a Meat Effigy. Beardlords always drop 2 Beard Hair upon being killed.

For gathering Beard Hair from Beardlings (Rabbits), there are few methods more advisable - and enjoyable - than the combined use of a Boomerang and a Nightmare Amulet. By equipping the amulet just before the boomerang deals the fatal blow, and unequipping it immediately after, the loot of a Beardling is guaranteed, and the Nightmare Amulet will take very little durability loss.

Additionally, while in the Ruins, the player can wait for the Nightmare Phase around a Splumonkey Pod to fight the Shadow Splumonkeys that spawn. Caution should be taken as they are very dangerous in large numbers and can overwhelm the player. Each Shadow Splumonkey drops 1 Beard Hair upon death.

As Wilson is the only character with a beard that can be shaved to obtain Beard Hair, playing as any other character will require the player to lose sanity and hunt Beardlings and Beardlords to build a Meat Effigy, find the odd Set Piece that might have one or two of them, or hunt down Shadow Splumonkeys.

In the Reign of Giants DLC, Beard Hair has a chance to be obtained when harvesting Tumbleweeds.

In the Shipwrecked DLC, Beard Hair is obtained by killing Beardling Crabbits (20% chance).

In the Hamlet DLC, Beard Hair is required to craft Beard Hair Rugs. Webber is also able to craft the Shamlet Mask using Beard Hair. It is obtained by killing Spider Monkeys or transforming back from Werepig form as Wilba. 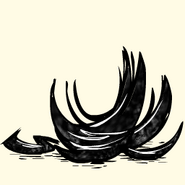 A teaser image of "Wilson's Beard Hair" posted on June 20, 2012.
Community content is available under CC-BY-SA unless otherwise noted.
Advertisement