“An ancient and mysterious structure.”

“It is full of the echoes of the dead.”

“A monument to some long dead god.”

“Where are their gods now?”

“It reveals an entirely new branch of science!”

“These crafts had better be gööd.”

“Old and full of mysteries.”

“This is giving me major jeepers.”

“A structure from antiquity.”

“A statue from ye old times.”

“WILBA CAN USETH FOR MAGICS”

“Some incredible stuff could be assembled here.”

“A fun place to do some naughty magic.”

“Do you think aliens helped them make it?”

“It seems like they were a clever bunch. Just not clever enough.”

An Ancient Pseudoscience Station is a Crafting Structure found only in the Ruins. It gives access to the Ancient Crafting Tab and emits enough light to protect from Charlie when nearby.

When struck with a Hammer, being fully repaired or being destroyed, lightning will strike the player and the station will either drop loot or spawn enemies (see the table below). Upon destruction it also drops 2 Thulecite, 1 Nightmare Fuel with a 50% chance, 1 Frazzled Wires with a 50% chance and 1 Rocks with a 50% chance.

A fully repaired Ancient Pseudoscience Station will be completely destroyed after 10 hits from a Hammer, causing 11 lightning strikes and drops. Thulecite can be used to repair a damaged station, with one Thulecite / six Thulecite Fragments repairing 1.5 Hammer swings worth of damage. Broken stations can be found naturally in the Ruins with only 1 hit left, and players can repair them of 9 hits (6 Thulecite) to obtain a fully repaired Station. The last stage of repair causes a lightning strike.

When slightly damaged, broken Ancient Pseudoscience Stations have half the available recipes (7 instead of 14), but will still emit light.

In Don't Starve Together, killing the Ancient Fuelweaver will cause all the Broken and Repaired Ancient Pseudoscience Stations to respawn. Damaging stations with a hammer will also not cause lightning strikes.

Walter can make Cursed Rounds from his Slingshot Ammo Tab when next to any Ancient Pseudoscience Station.

Possible result after a hammer strike: 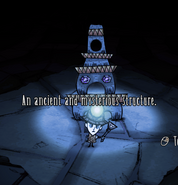 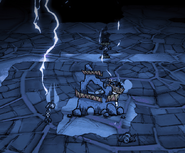 A broken Ancient Pseudoscience Station summoning lightning after being hit with a hammer.

Mayhem ensues after an Ancient Pseudoscience Station is hammered down.
Français 中文
Community content is available under CC-BY-SA unless otherwise noted.
Advertisement