(except ordinary requiring nothing)

“Looks dark down there.”

“Is for going into.”

“Will it lead to my death?”

“The entrance to a subterrestrial maze of ancient rooms.”

“Where does that go?”

“Leads down into the depths.”

“A reasonable deduction would be to assume there are artifacts within.”

“Where do you think that goes?”

“I should take a peek inside.”

“Inta tha depths with me.”

Ancient Pig Ruins are areas introduced in the Hamlet DLC. They can be accessed by entering a Ruinous Entrance, which can be found in the Plains, Rainforest, Deep Rainforest or Gas Rainforest biomes. Clicking on the entrance will transport the player into an Indiana Jones-esque temple ruins containing many rooms connected to each other, complete with decorative wall art.

Most rooms are completely dark, with the exception of light emitted from exits and ceiling gaps during Day and Dusk. Ceiling light is typically above an item surrounded by spike traps or above a room full of Grass Tufts and Saplings. Some rooms contain Wall Braziers that can be fueled like a Fire Pit, but are considered uncontrolled fires like a Campfire, potentially burning nearby flammables.

When being inside any Ancient Pig Ruins, there is no loss of Sanity in darkness.

Entrances located in the Deep Rainforest and Gas Rainforest biomes will have Creeping Vines covering the entrance, which must be destroyed with a Machete or Shears.

The ruins with a Pig statue above the entrance will have a second exit leading to the island with the Palace.

The ruins with an artichoke above the entrance will have a second exit leading to the island with the Fountain of Youth.

The ruins with a Mant statue above the entrance will have a Pherostone located within them.

The ruins with the Ancient Herald statue above the entrance will have a second exit leading to the island with the Aporkalypse Calendar in the ruin located deeper in the island. This ruin is also where the End's Well can be found.

The Palace and Fountain ruin entrances are found in Deep Rainforest biomes on the first island and their respective islands.

The Pherostone and Aporkalypse ruin entrances are found in the Gas Rainforest biome on the first island.

The fifth island (with the Aporkalypse Calendar) has two ruins, both with the Ancient Herald statue. One connects to the first island; while the other contains the End's Well and Aporkalypse Calendar, and is surrounded by several Snaptooth Flytraps in a Set Piece-like fashion.

Many of the doorways within these ruins will also be covered by Creeping Vines, which, unlike the ones on the entrances, regrow daily.

Some rooms have Pressure Plates that, upon being activated by the player, followers (including Abigail), or even Shadow Creatures, will close any surrounding doors besides the exit. One or more of these plates must be weighted down with an item to open the doors. Pressure plates may also activate Striking Carvings. Pressure plates that activate doors are either lined up in long rows or in a pattern of five plates, one near each possible doorway and one in the center. Pressure plates that will activate Striking Carvings are typically in a pattern of nine, three equidistant rows of three. Some rooms contain Nasty Spear Traps, which activate automatically or by proximity.

There are also Striking Statues that shoot darts while rotating clockwise in some treasure rooms, triggered by Pressure Plates or by chiseling the relics on the room. These are found in treasure rooms in the Palace and Fountain ruins, and in many normal rooms in the second Aporkalypse ruins.

“I should burn it down.”

“How Wolfgang breaking that?”

“Life is an endless enigma.”

“I do believe a mystery lies beyond that.”

“That's not fooling anyone.”

“A fissure in the wall! My curiosity is piqued!”

“Reveal thy secrets tö me!!”

“I think there's something through there.”

“It would not pass health inspection.”

“There be treasure a'hind it!”

“Not conspicuous at all.”

Some rooms in the ruins may have a Suspicious Crack in the wall where a door would otherwise be. These cracks can be investigated by using a Magnifying Glass or Spectoggles, after which the character will explain whether or not it is concealing a door. The cracked area can be destroyed using Gunpowder, Coconades, Slurtle Slime, a Weather Pain, or by causing a cave-in with a nearby Unimportant Pillar. Upon being destroyed, if there is no door there will be a solid section of wall. If there is a door it will now show up as a pathway on the Ruins map. The hidden rooms will contain pedestals with items that the player can steal. These unique pedestals have no name and cannot be destroyed. If an item is stolen, there is a chance it will spawn an Ancient Spirit. Those items do not replenish. Here the list of items and their chances of appearing. Aporkalypse Calendar is always in a room accessible through Suspicious Crack. 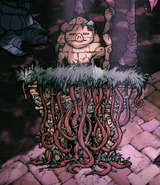 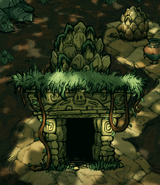 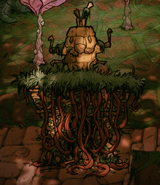 Example map of a fully explored ruins with 2 exits.

Concept art of the Ancient Pig Ruins entrance from Rhymes with Play #237.