“Wolfgang just let him be.”

“NEITHER A FLESHLING NOR MY BRETHREN”

“A harbinger of some sort.”

“It must be one of the ancients! I must get a closer look!”

“Mon dieu! He is frightening.”

“You must be a riot at parties.”

The Ancient Herald is a Boss Monster that spawns during the Aporkalypse. If killed, it will respawn indefinitely, until the Aporkalypse ends. When it is killed, it drops five Dark Tatters, two or three Nightmare Fuels, and a Blueprint for the Vortex Cloak.

The Ancient Herald will rise from the ground somewhere on the player's screen a short time after the Aporkalypse begins. It will slowly pursue the player, losing interest if the player gets far enough away. If the player returns to the Ancient Herald, it will not be aggressive unless attacked.

It attacks by diving into the ground, emitting a shockwave that destroys structures and damages nearby enemies, setting them on fire similar to the Iron Hulk Head or Leg. In addition, it will periodically cast an incantation, summoning various creatures and attacks to help it. Each new Ancient Herald that spawns seems to 'prefer' certain summons over others, casting them far more often than it does any other.

The various monsters it spawns, coupled with the destructive power of its attack, means that this boss is very difficult to fight.

A recommended fighting style is to invest in ranged weapons. Plunder the ruins for blow darts, or craft enough to kill it. A Blunderbuss with ammo will easily take care of the Ancient Herald. Kiting the Herald itself is easy, as its attack is very simple to dodge. Kiting the Herald and all his summons is extremely difficult, and will very quickly kill you.

When engaging the target, there are a few things to keep in mind. It always spawns near you, and other monsters do not attack it. The best place to fight the Ancient Herald is a place with many fully grown Flytrap Snaptooths, or in the pig cities. If unavailable, pick an area with a large amount of terrain where you can run away easily. It is not recommended to fight the Ancient Herald in an area that you traffic often, as there will be many summoned creatures left over.

The Poison Dartfrogs will empty your inventory and kill you in a matter of seconds. Put a stack of an easily acquirable material (Cut Grass, Twigs) in the leftmost slot of your inventory, to give yourself some insurance. It is nigh-impossible to kite them, so simply run away and let them lose interest.

The Ancient Spirits are slow, and will often die to the Herald's aoe attack. They are easily distracted by other mobs, but if not distracted, will constantly harass you.

The Dragoon Eggs are subtle, but if the Herald does his summon animation and no monsters instantly spawn, then get ready to dodge the shadows on the ground. 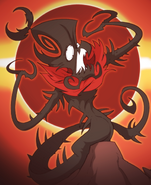 The Ancient Herald as seen in a drawing from Art Stream # 73.
Retrieved from "https://dontstarve.fandom.com/wiki/Ancient_Herald?oldid=454878"
Community content is available under CC-BY-SA unless otherwise noted.