Abigail is the Ghost of Wendy's dead twin sister. She can be summoned with Abigail's Flower, Wendy's exclusive starting item. Abigail will defend herself and Wendy against attacking Mobs, and will attack anything that Wendy attacks (even if Wendy cancels the attack).

Abigail cannot be frozen by the Ice Staff, and she cannot help the player fight Shadow Creatures.

Abigail has a fast, periodic, area-of-effect attack that damages all hostiles within a small radius. If she attacks mobs that spawn in groups such as Spiders or Beefalo, she will incite the whole group. Abigail can also damage Spider Dens, Beehives, and Killer Bee Hives. She will not automatically attack anything (except for neutral Treeguards) mobs have to attack her first or become a threat to Wendy. Abigail will stop attacking after a few seconds if mobs are not targeting her or Wendy, or if Wendy moves a large distance away (about two screens).

When traveling, Abigail follows Wendy, always maintaining a small distance. Abigail can keep up with Wendy as long as she stays off Roads and Cobblestones and doesn't use a Walking Cane. Abigail will teleport off screen near Wendy if the player goes too far away from her.

If Wendy intentionally attacks Abigail using the CTRL+Click option, Abigail will "die" in one hit and leave her flower on the ground. This can be used as a method to dismiss her at will.

If Wendy enters a Cave while Abigail is following, she will follow the player in the cave as is the case with any other followers. 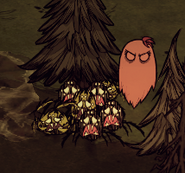 Abigail has an attack that damages all enemies near her.

Abigail stuck over the water. She's also trying to attack a Redbird offscreen.

Wendy and Abigail together both glowing.

Pigs using Abigail as a light source during dusk.
Add a photo to this gallery

Retrieved from "https://dontstarve.fandom.com/wiki/Abigail?oldid=241007"
Community content is available under CC-BY-SA unless otherwise noted.