“Ah... I'm not familiar with this strain of flower.”

“Hm? What a familiar presence.”

“A totally normal flower. Yeah. That's what it is.”

Abigail's Flower is a character-specific item used by Wendy to summon the Ghost of her twin sister, Abigail.

In Don't Starve, Abigail is summoned by placing Abigail's Flower on the ground.

A mob death near the flower is necessary for Abigail to spawn. However, if Abigail "dies" and despawns into a flower and the mobs die (or Wendy kills something) around the flower after the cooldown period, Abigail will not spawn unless the flower is picked up first and then placed down near a death occurring.

Summoning Abigail drains Sanity by 50 points. When she "dies", she will drop the flower so Wendy can spawn her again after the cooldown period has expired. Note that one hit from the player will kill her and she can often be targeted unexpectedly by the player during battle.

The flower has three stages of blooming. Initially, it will start as a pale, closed flower. Once charged, it becomes a more reddish pink color and is in bloom. In the third stage, when ready for the blood sacrifice, it will levitate slightly above the ground. Abigail's flower does not need to be in the player's inventory to bloom, so it may be left at the player's base in lieu of inventory space while it (re-)charges. Abigail's flower is also visible from the map screen, making it easy to relocate should the player accidentally lose track of it. If the flower somehow falls into the ocean, it will disappear like a normal item and will re-spawn near the player.

In situations where Abigail somehow ends up following a player character other than Wendy (e.g. by completing an Adventure Mode run), Abigail will continue to follow the new character around in Sandbox Mode but will not drop the flower upon dying.

“Ah... I'm not familiar with this strain of flower.”

“Hm? What a familiar presence.”

“What a nice little flower.”

“It not quite as ugly as most flowers.”

“Did that flower just whisper something?”

“There's something about that flower...”

In Don't Starve Together, Abigail can be summoned by using Abigail's Flower in the inventory without any other condition, and Wendy gains 15

. Wendy can also use Abigail's Flower on Abigail to desummon her and to lose 15

Abigail's Flower can be crafted from 1 Mourning Glory and 1 Nightmare Fuel in the Magic Tab.

Wendy can ask Abigail to stay close to her or roam more free via Abigail's flower. In Sooth state, Abigail follows Wendy and will attack Mobs that either attack Wendy or that Wendy herself attacks. In Rile up state Abigail attacks every Mob close to Wendy, enemy or neutral.

If there is multiple Abigail's Flower at the same time they all behave the same. The flower has 4 blooming stage. The first stage is obtained when Wendy is far from Abigail's Flower, on the ground, or in other player inventory. The second, third, and fourth stages are linked to the maximum health of Abigail.

Abigail's expression when low on health. 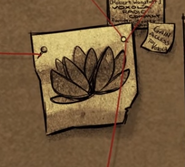 A picture of Abigail's Flower from the Next of Kin animated short.

Abigail's Flower as seen in the poster for the Strange New Powers update.

Abigail's Flower as seen on the 2017 Valentine Cards.

Abigail's Flower in a promotional image for Wendy's character update.