I never play as WX-78 in DST, too impractical.

How about you guys? 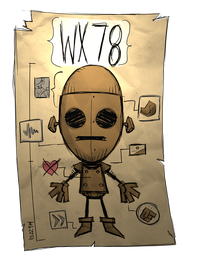 (edited by administrators)
1
MrMulk wrote:
Ok realistically Willow isn't that bad. In Don't Starve her only drawback is 80 less max sanity (which can lead to fire issues), but is not difficult to maintain at all. In DST they have added the freezing/sanity mechanic, which can be annoying, but as stated before sanity is rarely an issue. In both games, Willow has a significant cave advantage due to the tophat/lighter combo, which negates any sanity loss from the cave (also any form of fire can be used for sanity regeneration). What I have found is that most people who don't like her is because she has an undeserved really bad rep, considering I have yet to actually meet a griefer playing as her.

As far as multiplayer goes arguments against playing Willow do hold some more water. The only significantly helpful thing she can do that other's cannot is craft lighters for the other players, which albeit really helpful, is still not on par with some other character's buffs.

TL;DR Willow only has 2 drawbacks which are much less than her buffs (even if they're wimpy/mildly useless, especially in multiplayer). People seem to dislike her character for her bad rep and/or wimpy buffs

I wonder how long the post can last for until no one replies?

I think Willow is good esepcially for beginners who die easily at the first night by Charlie. It introduces players a very important concept to keep the night bright, and the aweraness to control sanity constantly. Playing Willow is all about controlling the small change happened to Willow due to her vunlerability. This is from the single player perspective, because I rarely play multiplayer.

Anyways I'm gonig to say its again, Wes is the worst and of course, I play him twice only.

The comment above was too mean. That's why i deleted it. If it still continues i will be forced to do unlikely things.

(edited by Itroad6666)
0
Itroad6666 wrote:
The comment above was too mean. That's why i deleted it. If it still continues i will be forced to do unlikely things.

This is why I don't like these types of threads. Thank you for removing the above comment.

(However, I just can't resist contributing, especially when one's favorite character is being discussed)

You are allowed to talk

about characters just to let everyone know, but you aren't allowed to offend other users. Its not their fault you are having a bad day.

(And i do not have many rights in here, im just a mod, so it was just a bluff. I can't do much to punish people)

Itroad6666 wrote: You are allowed to talk

about characters just to let everyone know, but you aren't allowed to offend other users. Its not their fault you are having a bad day.

That's a good use of template, give you one karma :)

If its kudos, thank you, but if its karma from League, NOOOOOOO

i see a lot of mixed opinions on wes. my opinion: if you're good enough to play with wes, try playing with an average character that DOESN'T have drawbacks. Even wilson will do for you; no need to pick the inferior character when you can just as easily play with the average wilson and do much, much better than Wes.

I have absolutely no problem with wes players in single player, but playing him in multiplayer doesn't really bring any interesting or team-helping abilities, unless you count sanity draining and damage dealing baloons as something useful.

Note: before you say wilson is useless too, wilson's meat effigies HAVE helped me a LOT in the past. they're great for adventurers or moments where you just have to explore. Plus his beard is really good for winter; you either just need a winter hat or just a therm stone with full beard so you can leave more materials and stones/hats for others.

Dude this discussion is over, see some other posts.

Alright, sure. was getting bored of talking about characters anyway.